This is an ongoing project and this page is being updated regularly.

Ray contacted buildahottub.com in July 2020. Ray’s situation was quite unique. Having recently completed a move from Portugal to neighbouring Spain, Ray set about transforming his backyard. The designs for a beautiful landscaped pool, waterfall, spa and tiki bar were all in place – or so he thought!

When Ray finally, with the help of his translator, got to the bottom of the plans, his builders were quoting him 38K Euros (yes, you read that correct!) to complete the Spa to how he wanted it. He was at a stalemate. Builders wanted more money. He didn’t want to pay the huge fee he was stuck!

Ray began to look for alternatives and his search lead him to www.buildahottub.com and Andi.

Ray made contact with Andi over the online chat on www.buildahottub.com and explained his situation. He had clear ideas what he wanted to achieve and believed that a a DIY approach with some helpful guidance from Andi could lead him to the perfect Spa – at nowhere near the ‘budget breaking’ 38K Euros!.

Ray contracted Andi to design the Hot Tub/ Spa (the initial retaining wall was in place, but nothing else), build the “control room SKID” and also supply all the materials from the UK to Spain.

This hybrid DIY / consultant / contractor / supplier model was going to get Ray back back onto budget. 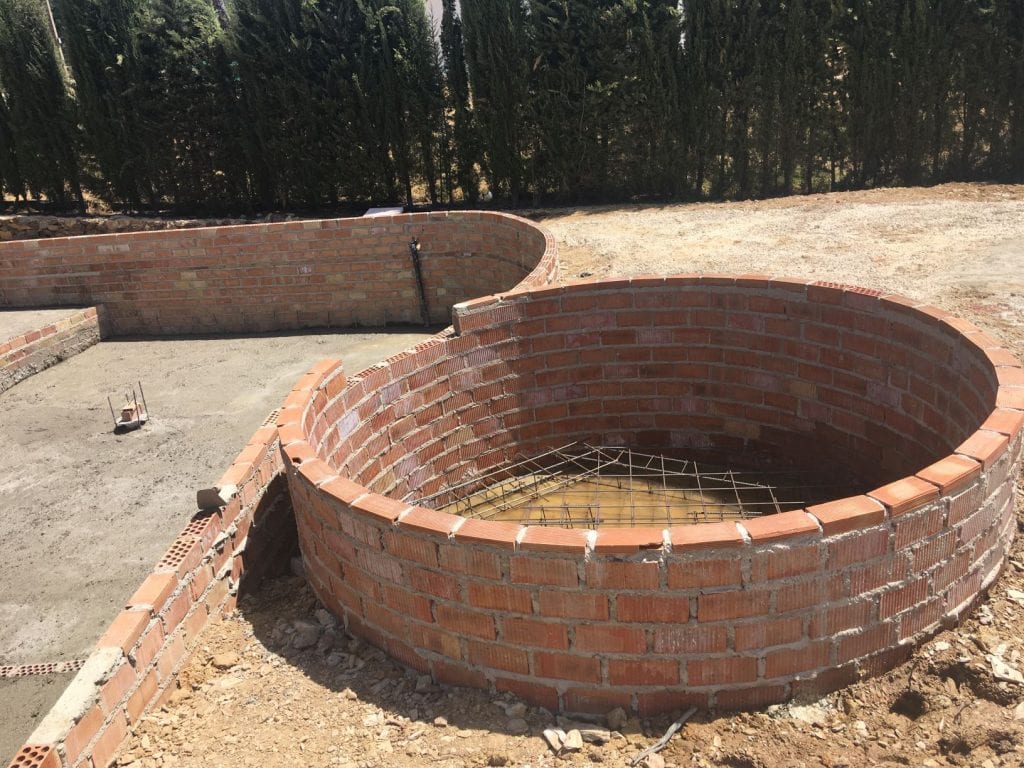 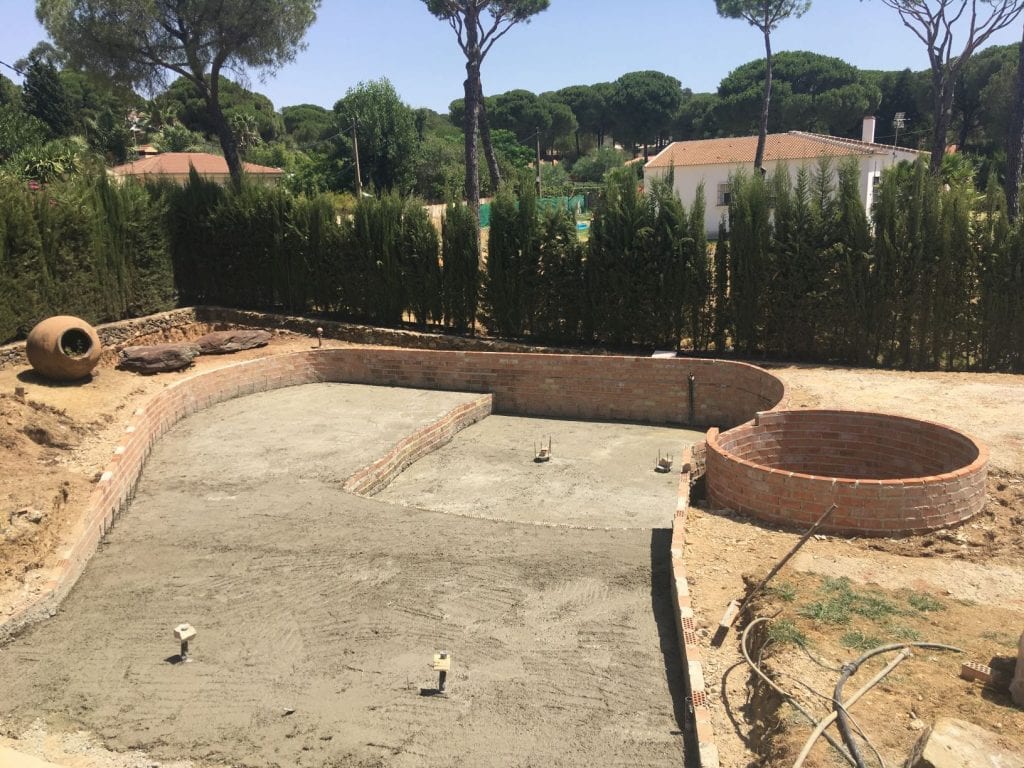 The scope of work was drawn up and agreed upon by both sides.

In short, design the Spa and plumbing to Ray’s spec. Build the Control Room SKID and supply all the plumbing materials needed.

The design phase moved at quite a pace as Ray knew exactly what he wanted. Plans and plumbing diagrams were drawn up. A couple of video consultations later, and the plans were completed and a shopping list of parts for the custom project were also drawn up and costed out. It would be unfair to put Ray’s plans that he paid for online so the video below shows the kind of CAD that we produced for him.

He got a full list of parts as well as a comprehensive set of instructions for how to fit them.

Builders were back on site with designs in hand, parts were on order and things started to move again for Ray. The second skin of the Spa was built and the concrete floor was also poured. 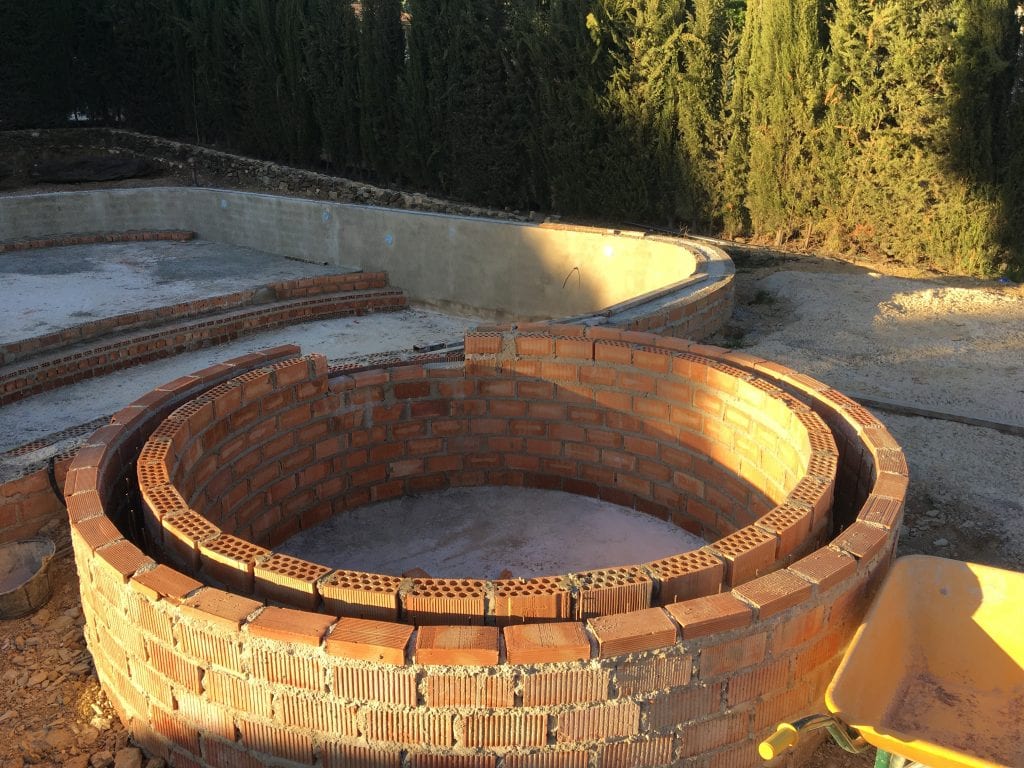 With parts making their way from the UK out to Spain, it was time for Andi to build the control room SKID for Ray. The perfect job for a Saturday morning! This comprised of a Pump, Blower, Filter, Spa Pack, Electric supply for the 12V AC Pool Light and some gate valves. This has now been build, semi-disassembled and shipped to Spain. Should be there in a couple of weeks. 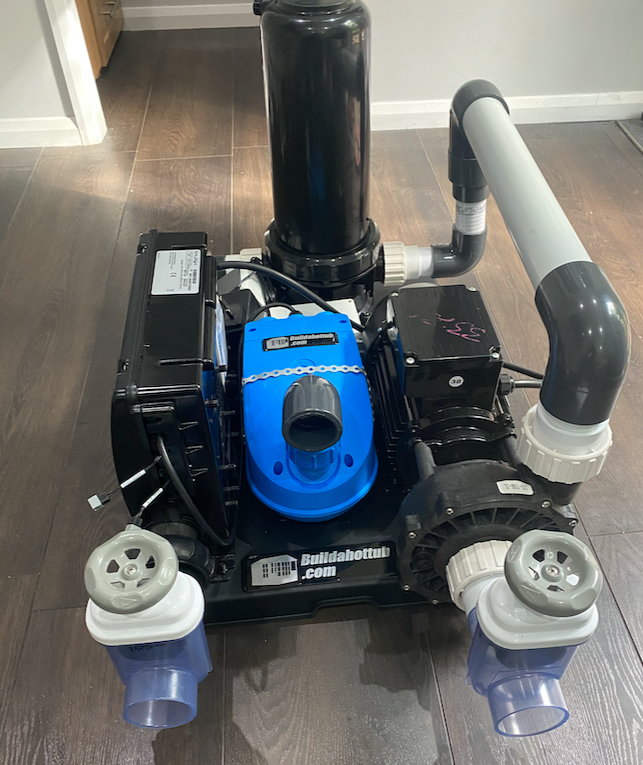 At the same time, on site, the holes were being drilled for the Gunite bodies and the skimmer was also set into place. These are being drilled first before the retaining wall for the seat is built. There are two low level drains and 16 Gunite jets arranged in 4 sets of 4 (3 on back, one in footwell). Will be a very nice setup once complete. 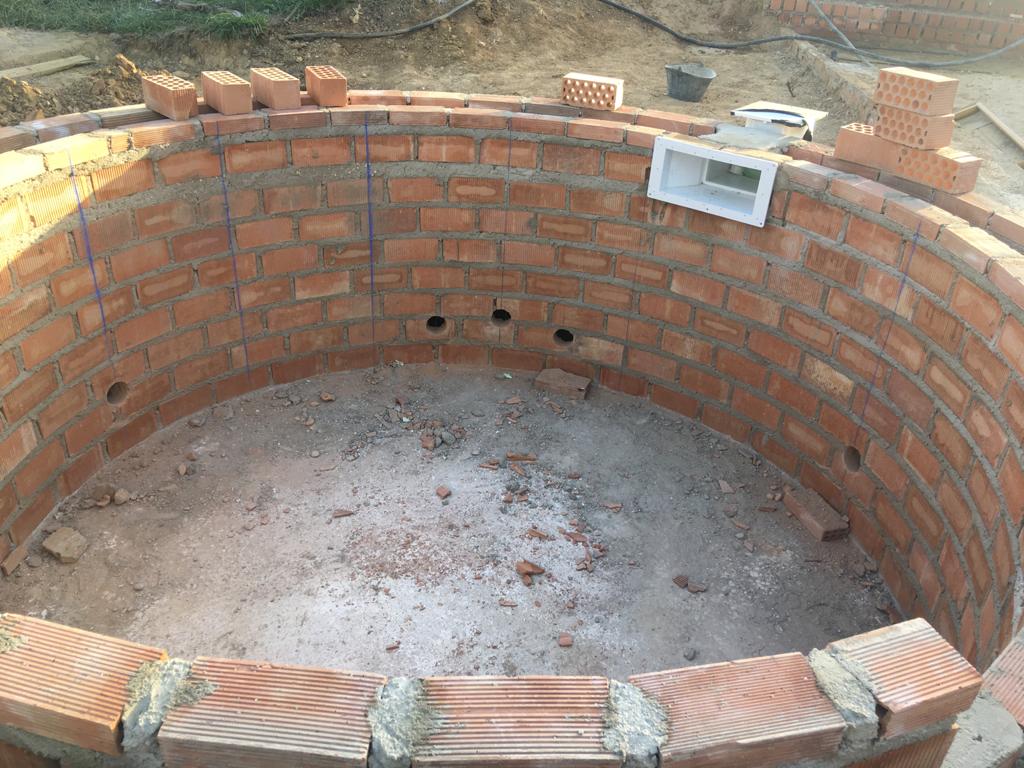 After a rocky few days with the builders (doing their own thing and not following instructions, even through a translator) things for Ray seem to be back on track. The inner wall for the seats has been built and skimmed (not sure why they have done that but Ray is not arguing as it will make things easier in the future) and the holes are starting go go in too. This is starting to look like a Hot Tub! 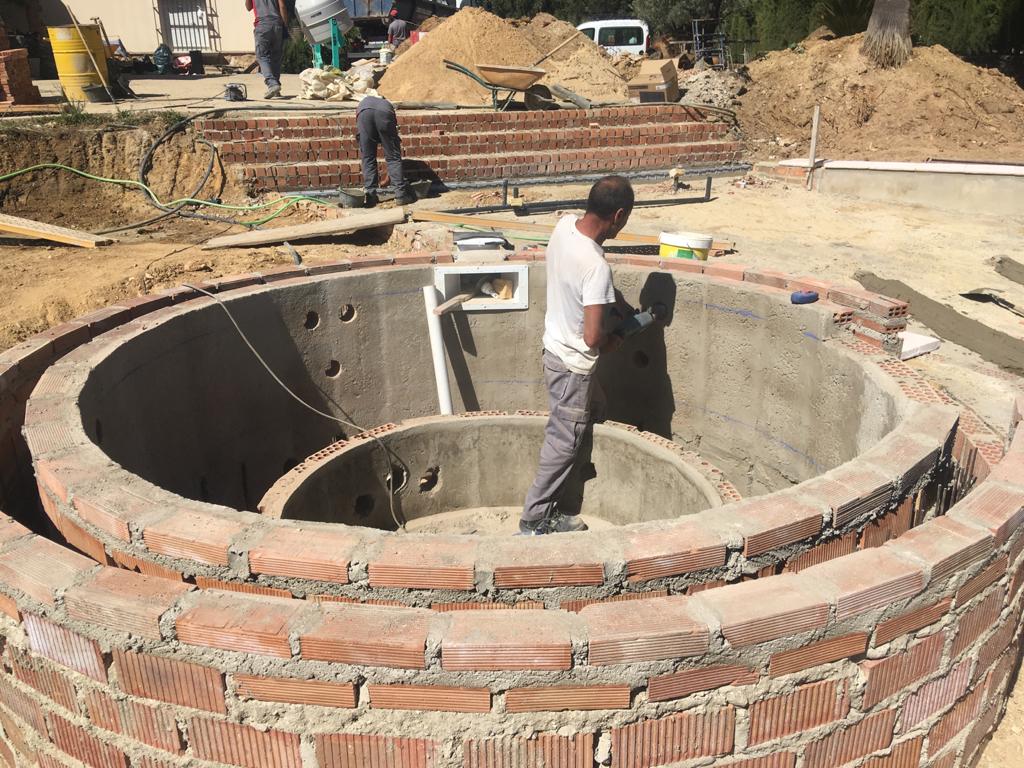 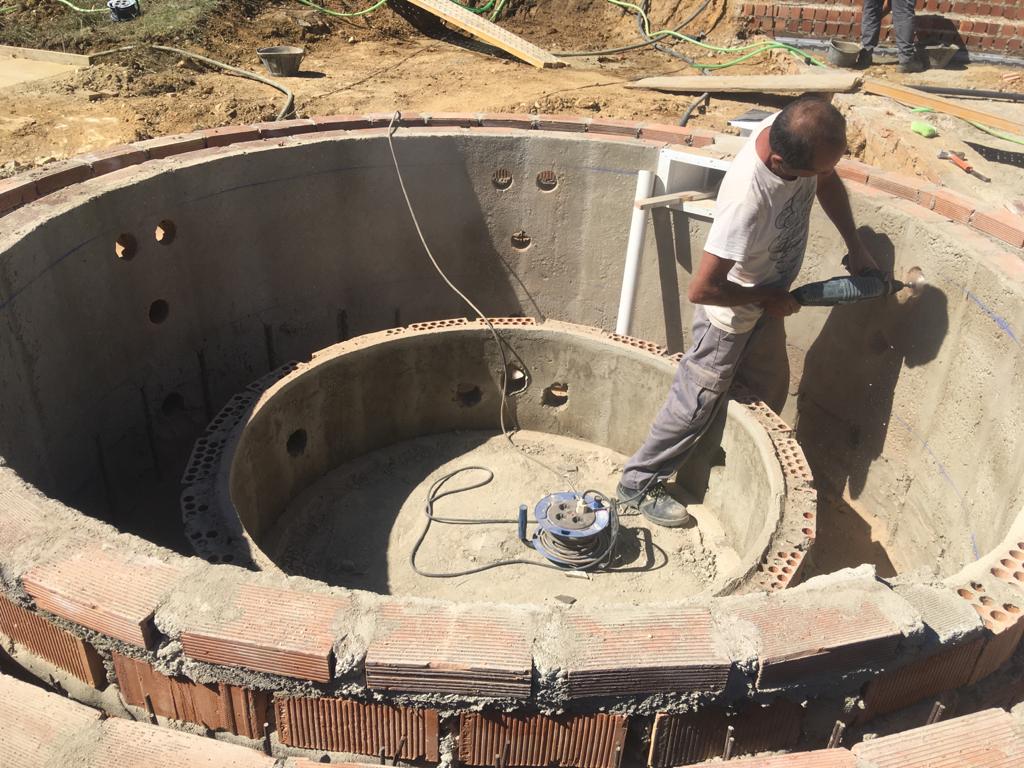 And there we have it. That is the progress so far from Ray in Spain. Things are moving nicely and we are updating the website on a weekly basis as Ray sends through the pictures.

The pace has really picked up with Ray’s build of the last few weeks and the results look fantastic. At time of writing, Ray is expecting to be finished in the next couple of weeks. The images below show some real progress from the empty shell where it all began. 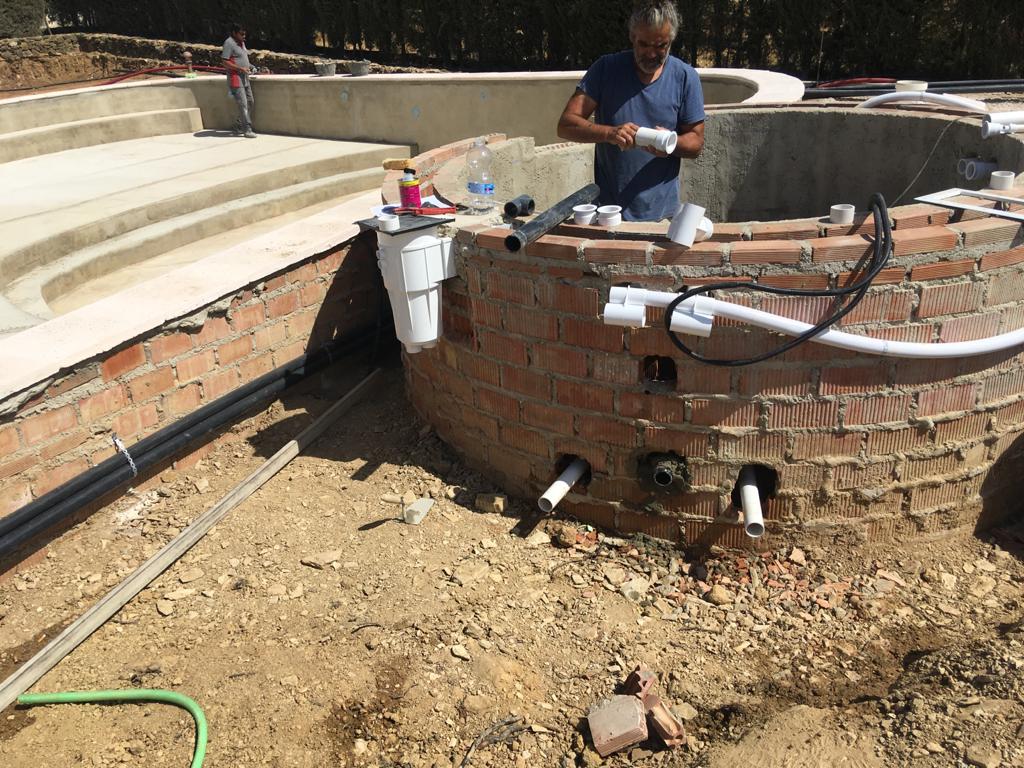 The plumbing is taking shape nicely. The Gunites have all been inserted into the pre-drilled holes and are being cemented into place. 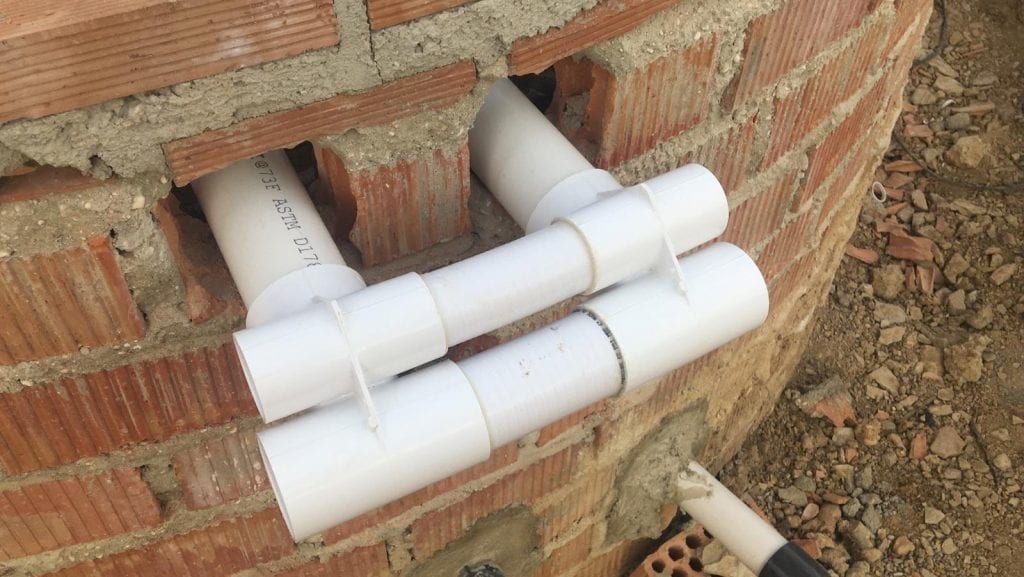 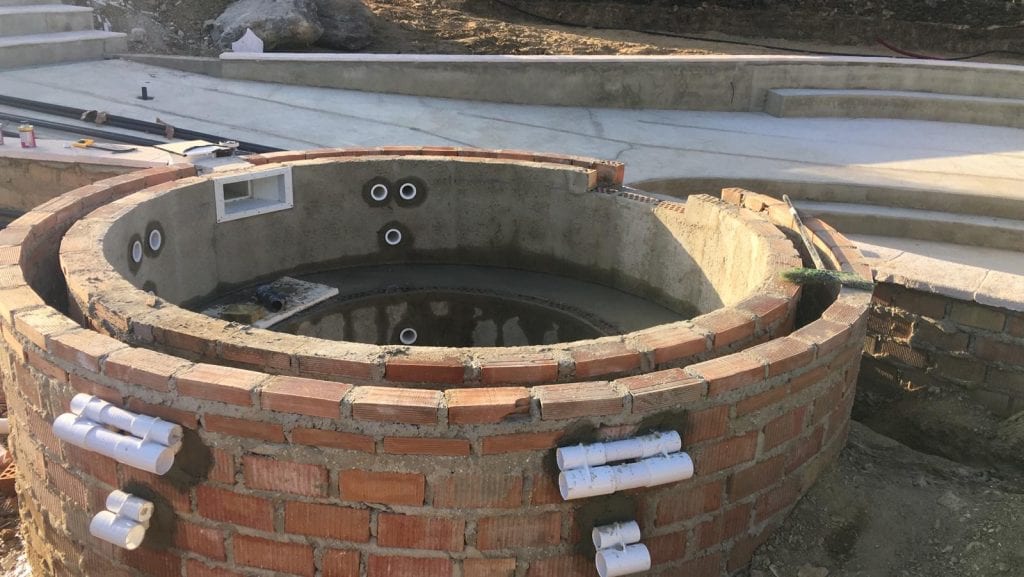 The concrete for the seats has now been poured and the holes around the Gunite novels have been filled ready for the final water proofing coat and then tiles. 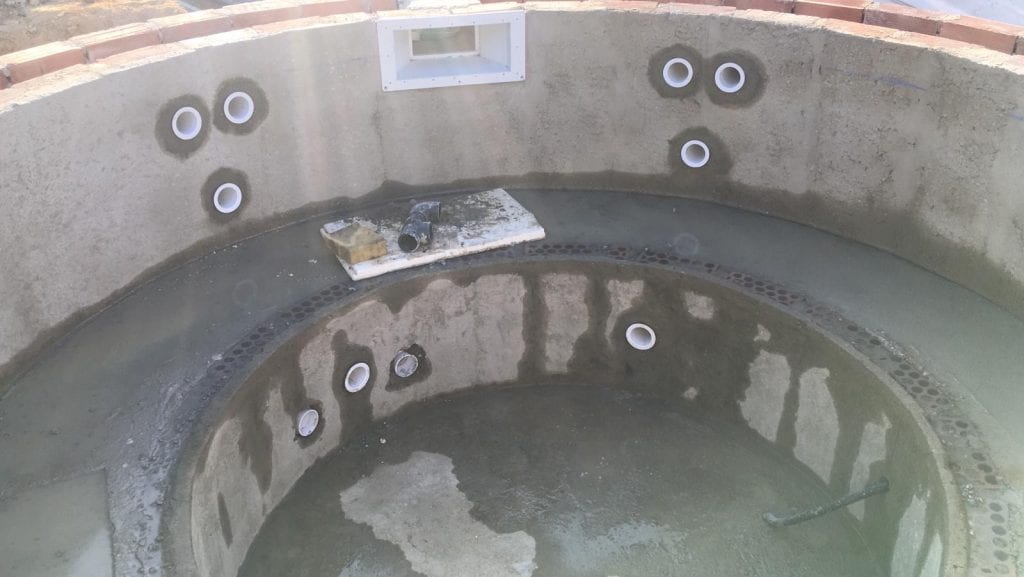 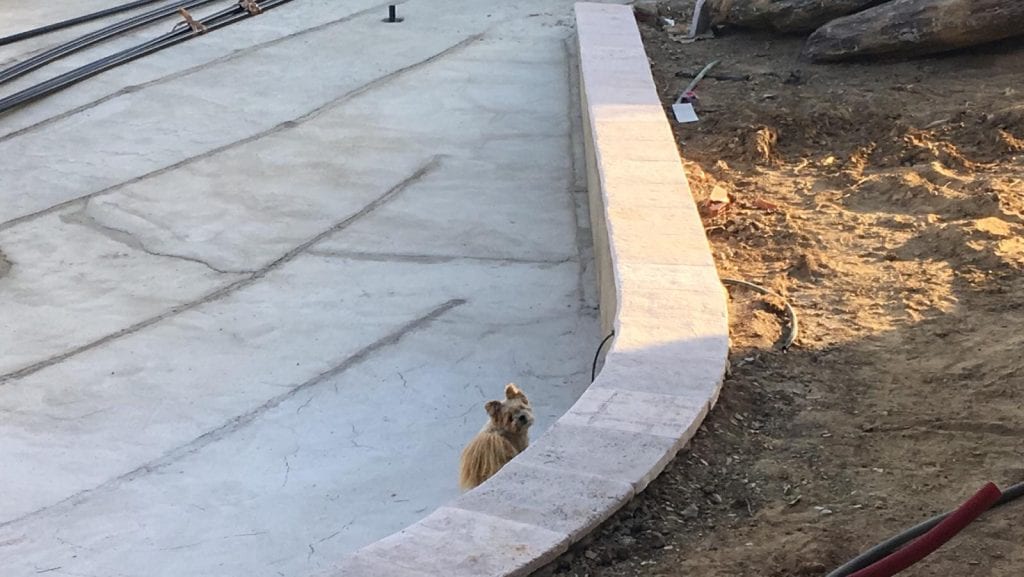 Even Ray’s dog is liking the work that is going on in the pool. 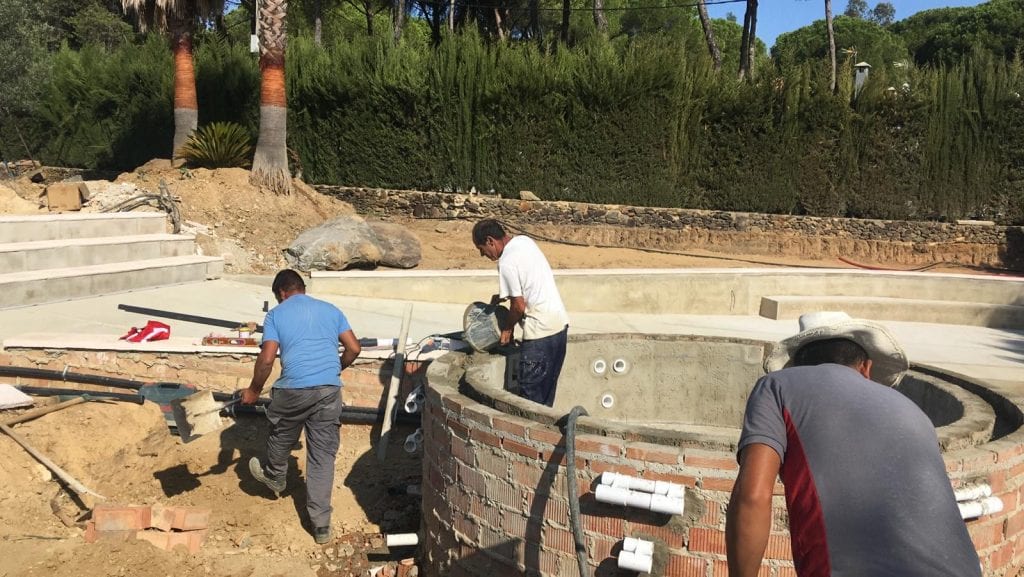 The guys on site here are digging the space for the “control room as well as filling the cavity with concrete. 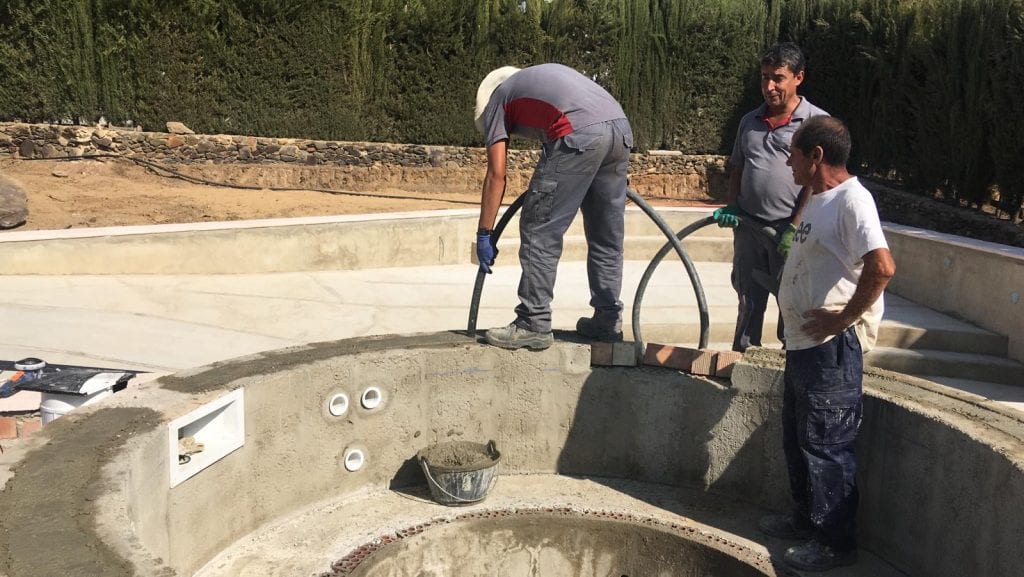 Below you can see that the steps are being put in place too. 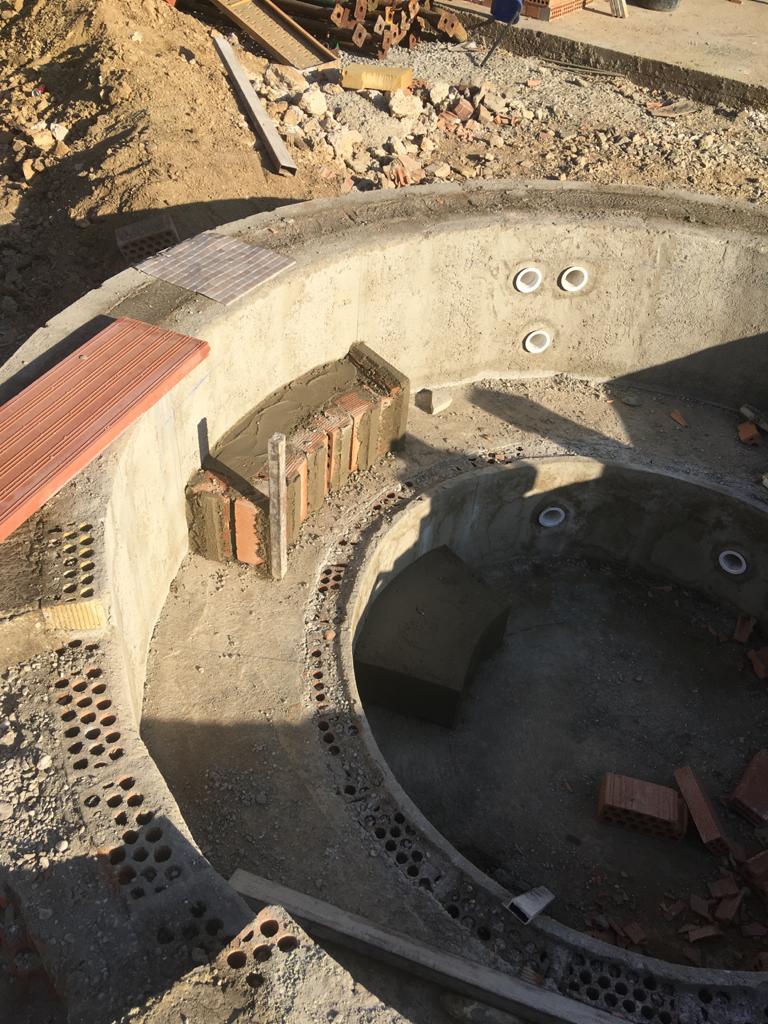 Well, it’s all starting to look a little bit like a Hot Tub!

The final shape of the steps has been moulded with concrete and the top layer of concrete render has been added to the lower seating area. 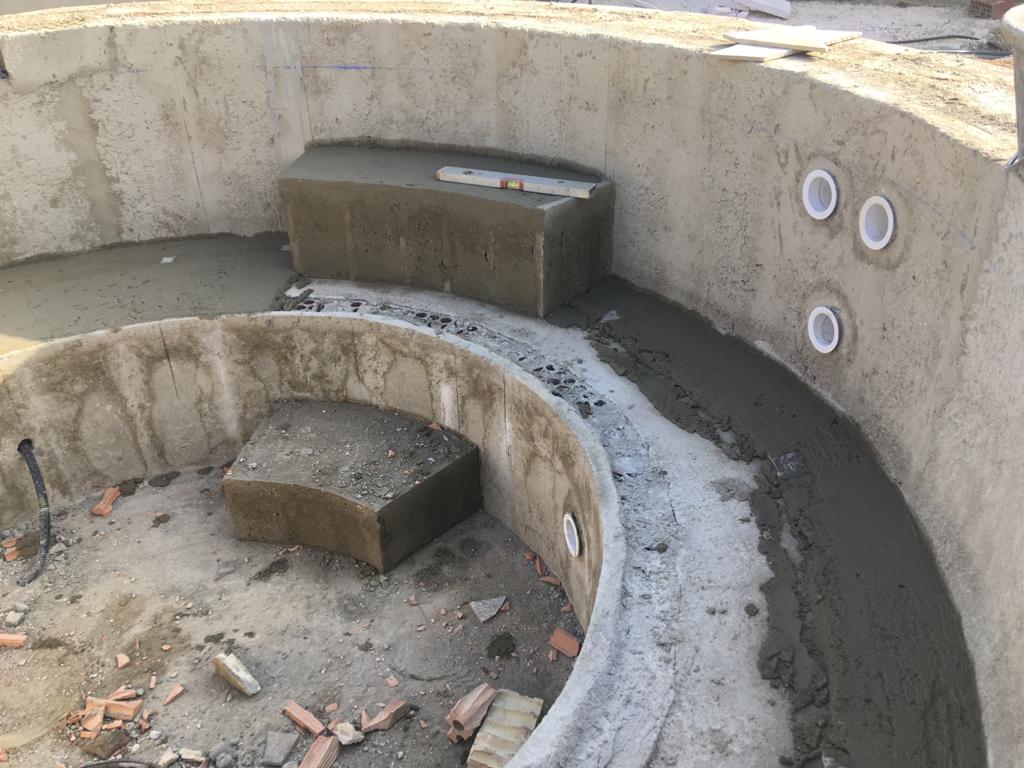 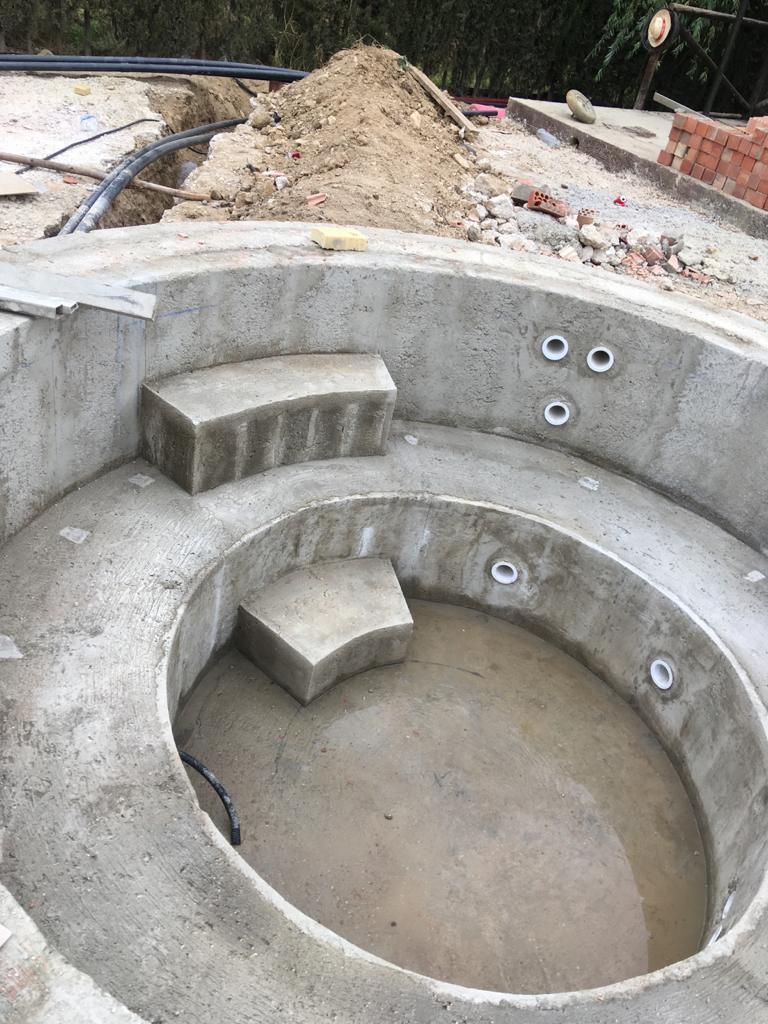 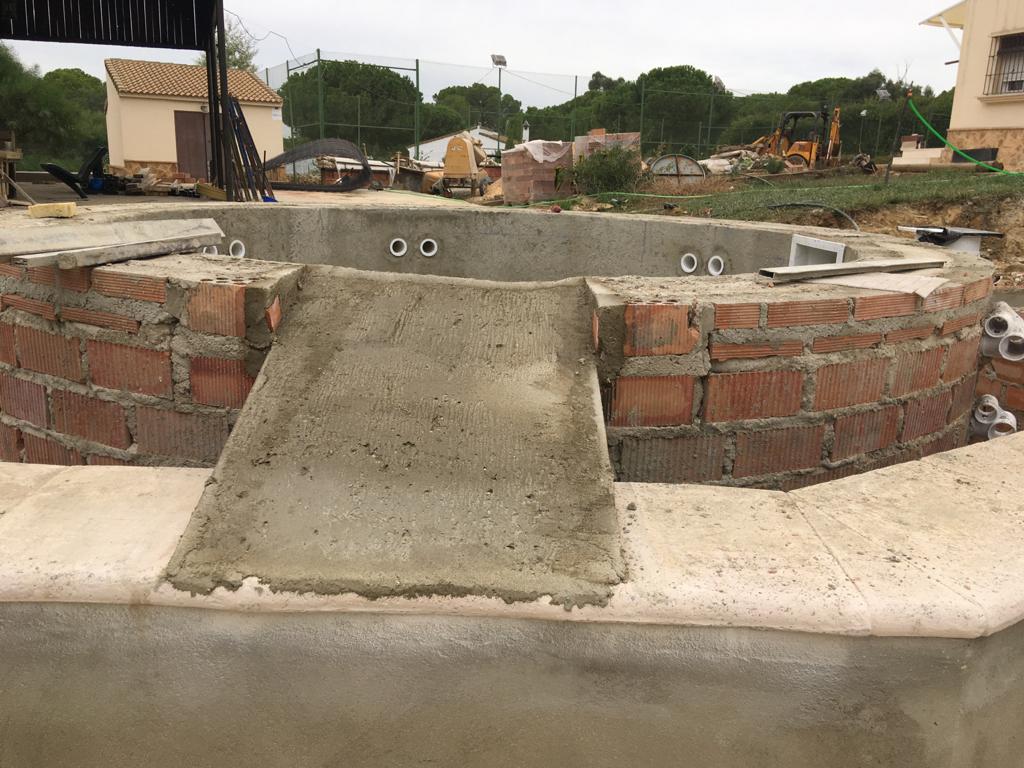 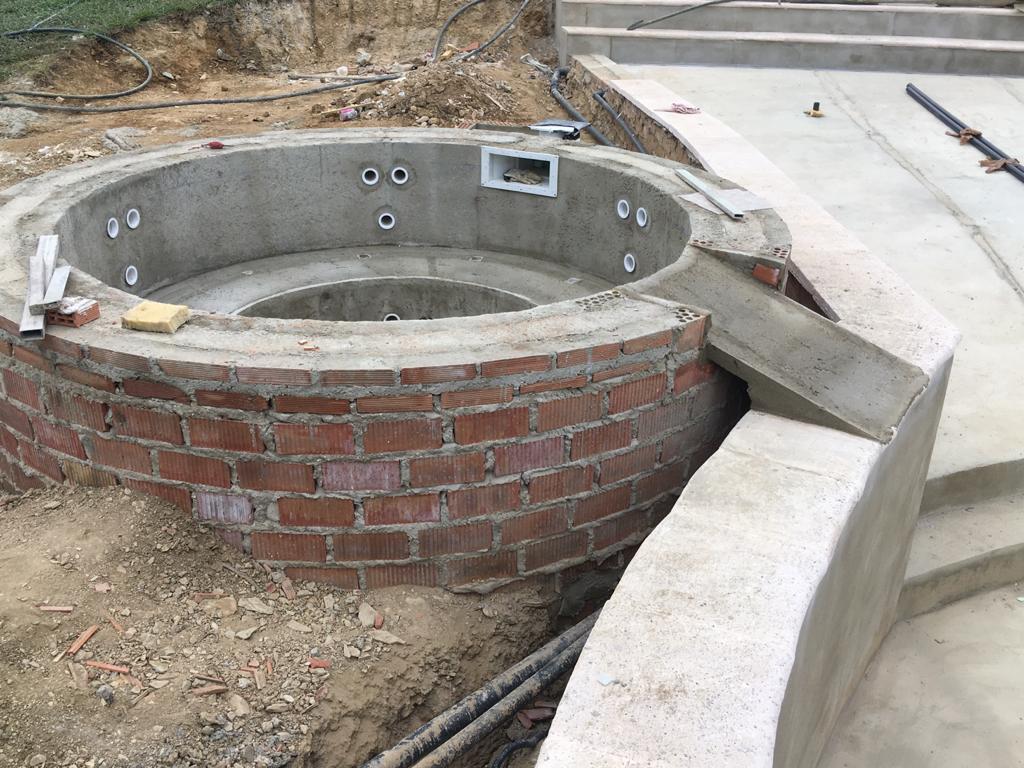 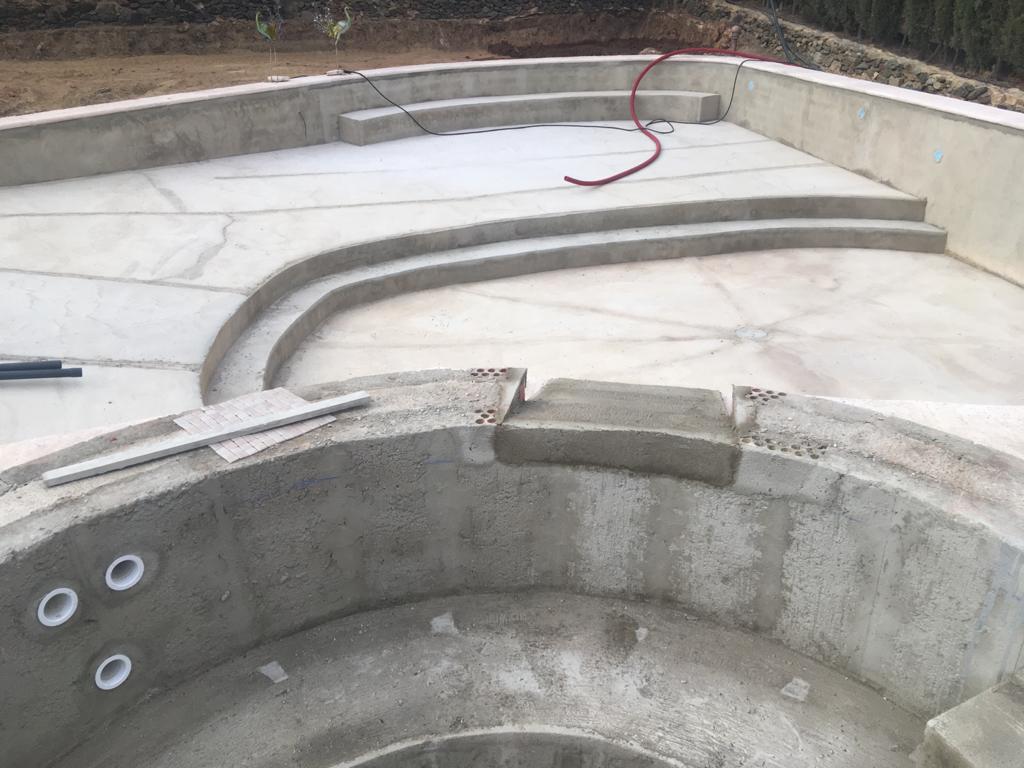 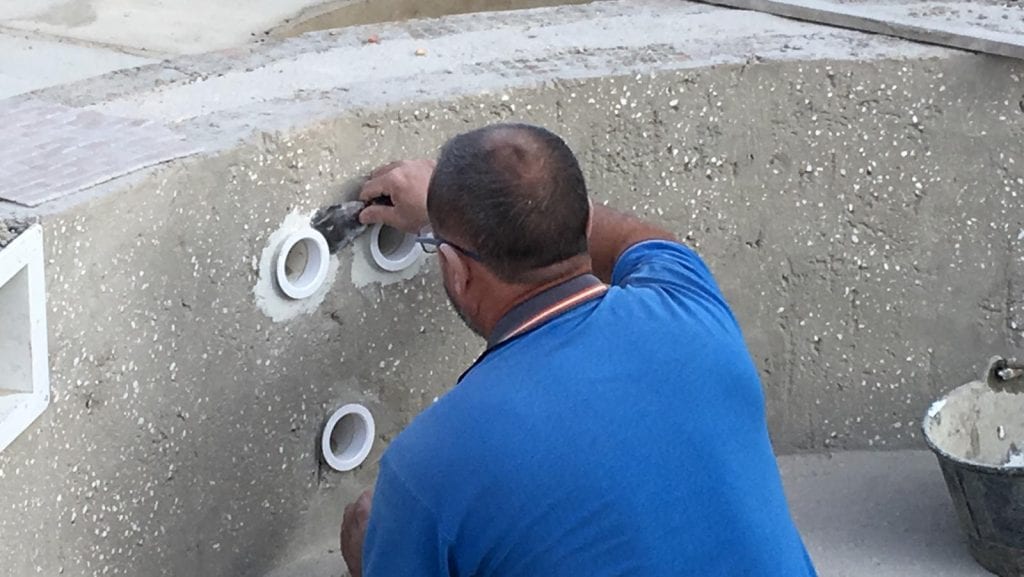 The final sealing of the Gunite jets is happening here. Next will be the waterproof layer and then the tiles. 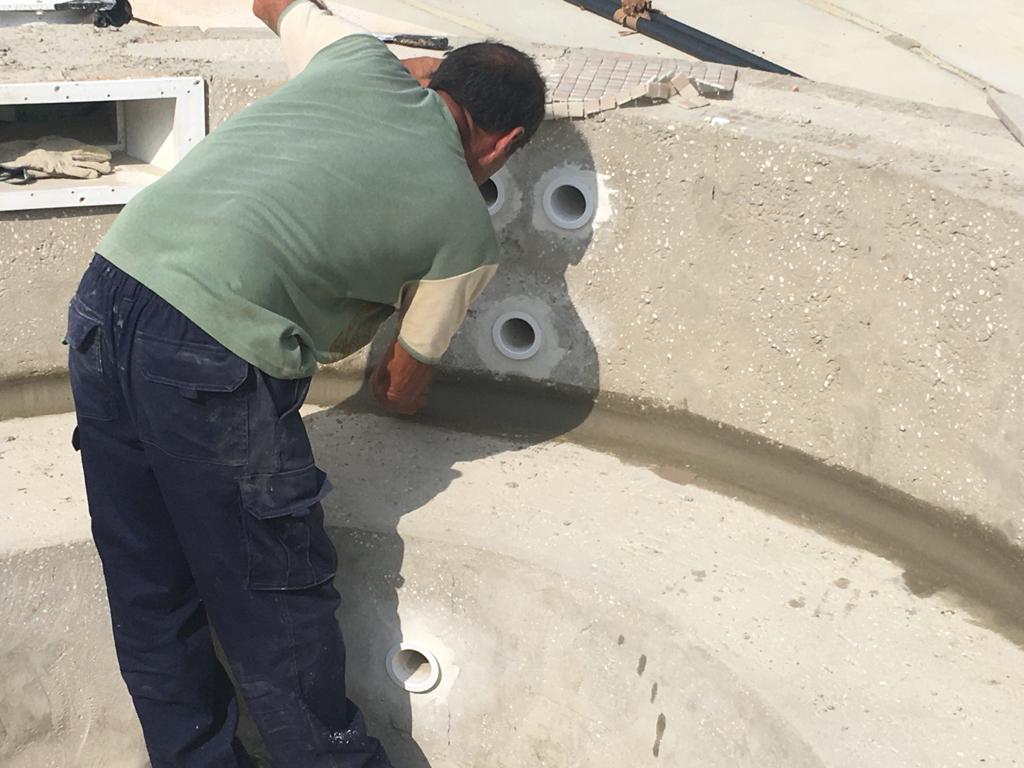 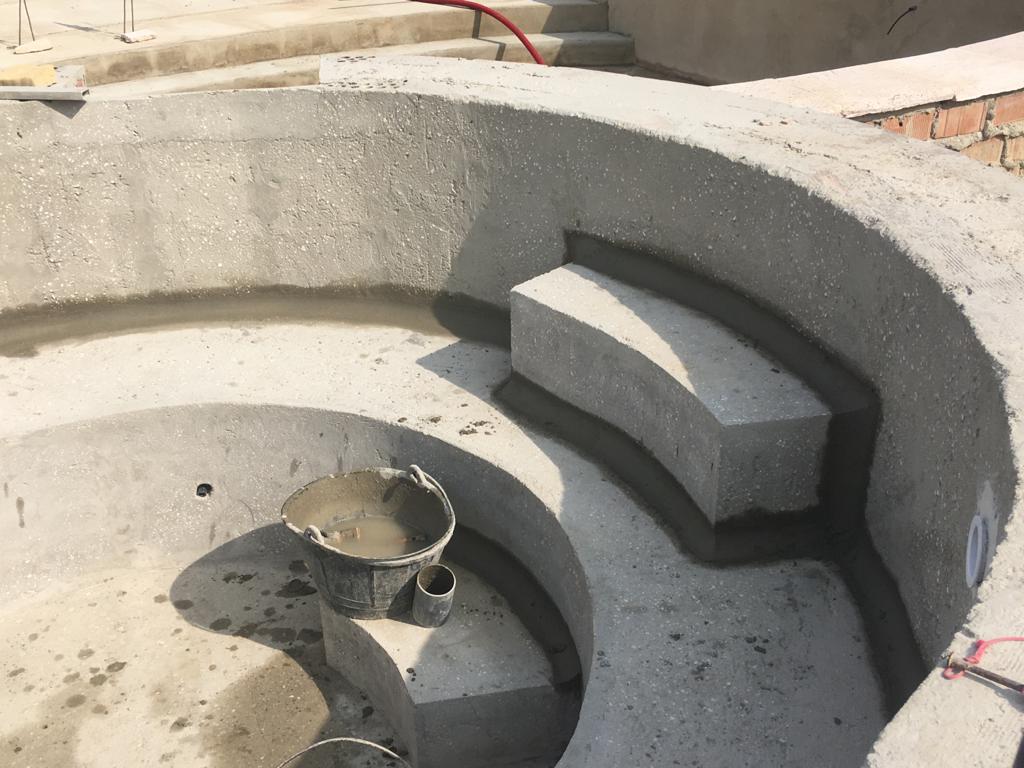 The edges around the steps and the seats are being filled. 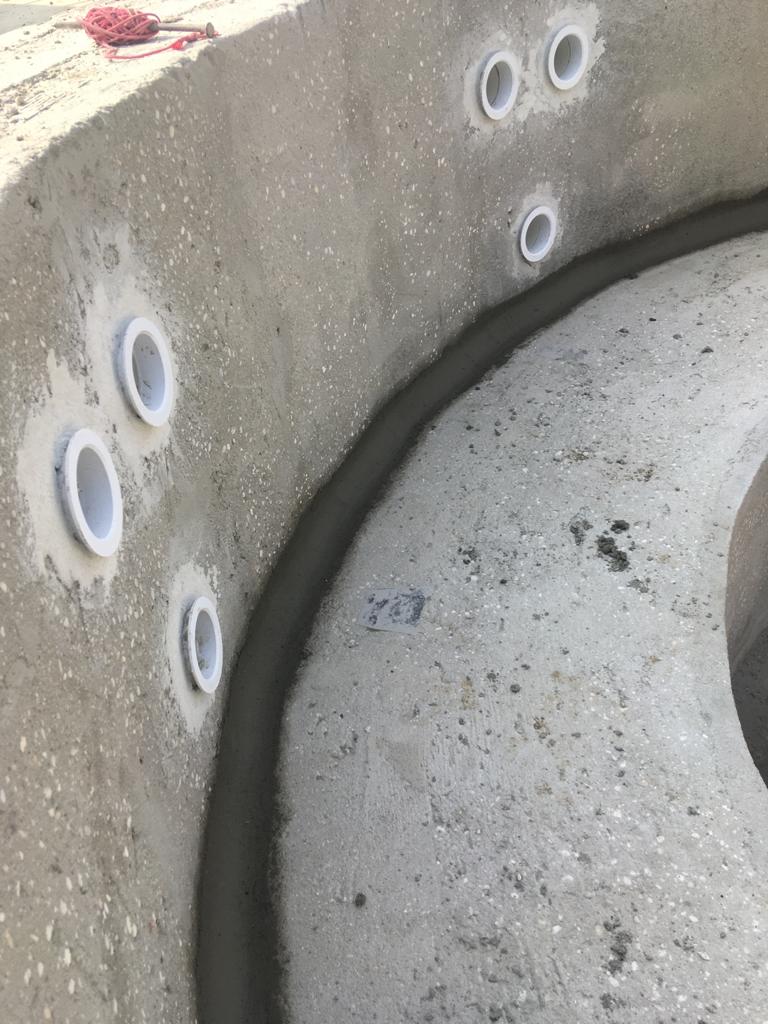 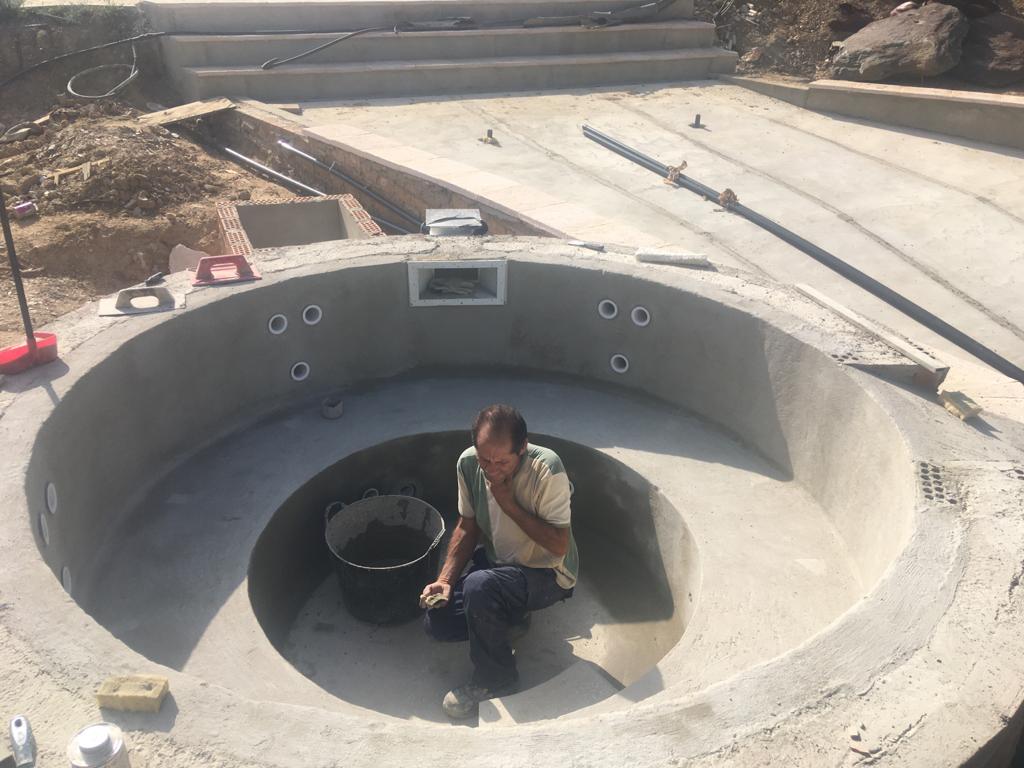 This really is starting to look like a Hot Tub. Next steps, waterproofing and tiles. In the background you can also see the control room cover has been built. This is going to be one fantastic setup that Ray has once it’s all done. – That should be less than 2 weeks according toRay!

Do You Need Some Help with your DIY Build?

If you need some help with your build then let us know. Drop us an email at andi@buildahottub.com or use the chat. We can help with plumbing designs. We can supply the specialist parts that you need. We can even convert your sketches into 3D CAD so you can better visualise what you are trying to build. Take a look at our plan options here.