This is where the “fun” really begins. You’ve been planning for what seems like an eternity wanted to get started so it is now time to break ground. For me, this was the hard part.

As I explained, due to access to my back garden and where I wanted to put the Tub, there was no way that I could actually get a JCB Digger in to help so it had to be done by hand. It was back breaking stuff.

I did however, end up buying a mechanical breaking drill. This made life a lot easier. You can rent them and the ones you rent are even bigger still. The problem that I had was that I was not sure how long it was going to take and I didn’t want to waste money on renting something that was not being used.

So I bought a mid range one. It was a god send and made light work of the earth when I did hit the clay and rubble. I would highly recommend one if you are not able to get one of the mini JCBs. The digging took me about two weeks doing a few hours at in the evening and full days at the weekend. There was a lot of rubble and earth to move.

When you are designing how deep you need to go and sticking with your dimensions, make sure that you have allowed for the various layers of type1 hardcore and concrete to a reasonable thickness. The last thing you wan it seats that are too narrow or a Tub that is not deep enough. 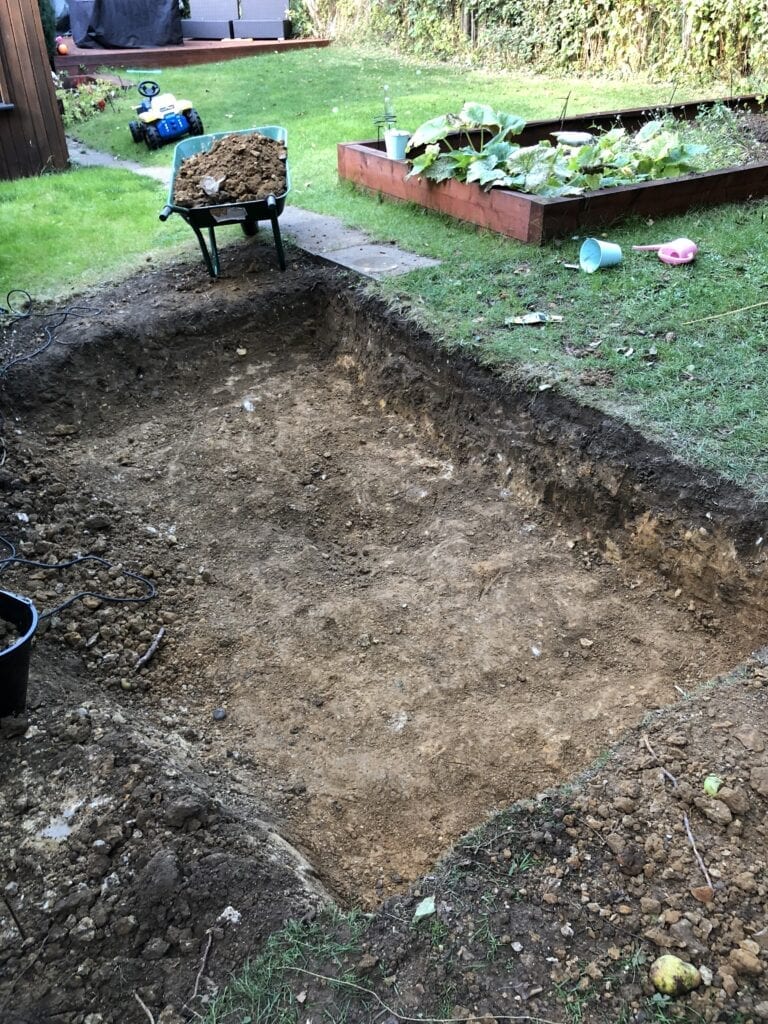 As I couldn’t get a digger round the corners of my garden either, I was doing all of this by hand. At this point, my back was hurting and the ground was getting harder so I open for the breaker. This was the best 200 GBP / 200 USD I have spent in ages! Made life so much easier. 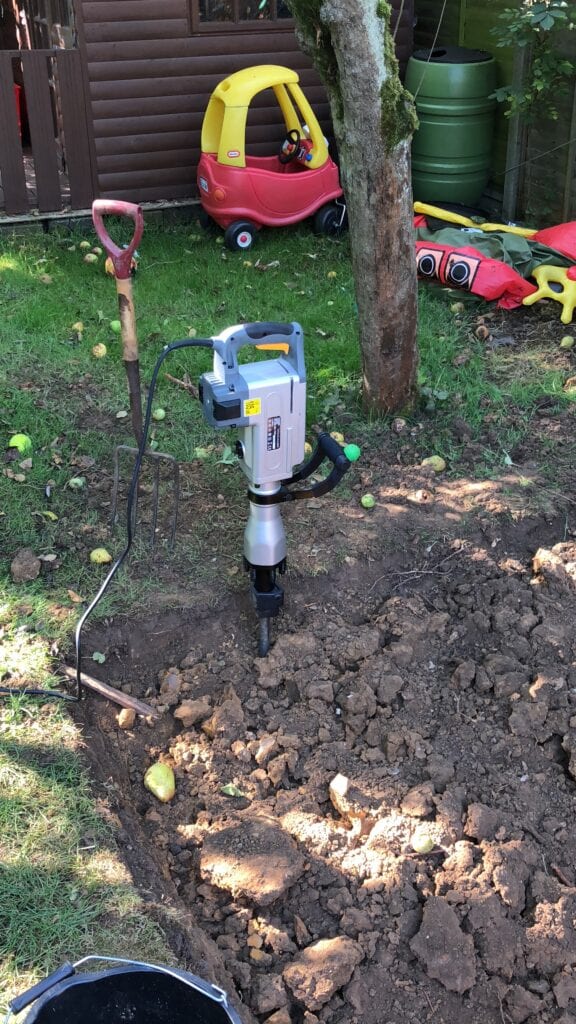 Being a competent DIY’er I had done some electrical work before so that didn’t concern me. The plumbing is “kitchen plumbing on steroids” so I wasn’t too worried about that. What did concern me was whether I could dig a hole and water proof it sufficiently so that it didn’t leak through the walls or through the floor.

My next concern was could I build a structure that was not going to give way under the pressure of the water. I had calculated that it was going to take about 2800 litres which is around 2.8 tonnes of weight – certainly not light. Therefore, I knew I needed concrete and lots of it.

Once I was down to depth (which was a huge milestone for me as my back was killing me and I was fed up of digging) it was time for the type1 gravel to be dropped in. Basically, I put around 6-7cm, or 2” of gravel and then compacted it. You could hire a “wacker” to do this, I just used a heavy piece of timber and a sledge hammer.

The whole point of the type 1 is that it can disperse the pressure of the concrete evenly helping it not to crack. Cracks equal leaks so you certainly don’t want these.

After I had put in the type 1, I decided I didn’t want to take any chances so bought a large PVC thick pond liner. This was going to ensure that I didn’t have any leaks. I laid this over the gravel as it was going to take the concrete and hold in the water.

Next were the steel rebars that were held together with metal wire. You see these being used in building structures so I thought it made sense to put them into the build, strengthen the base and stop it cracking under pressure. I’m sure there are some builders out there that would say total overkill, but remember, I was worried about strength and leaks. 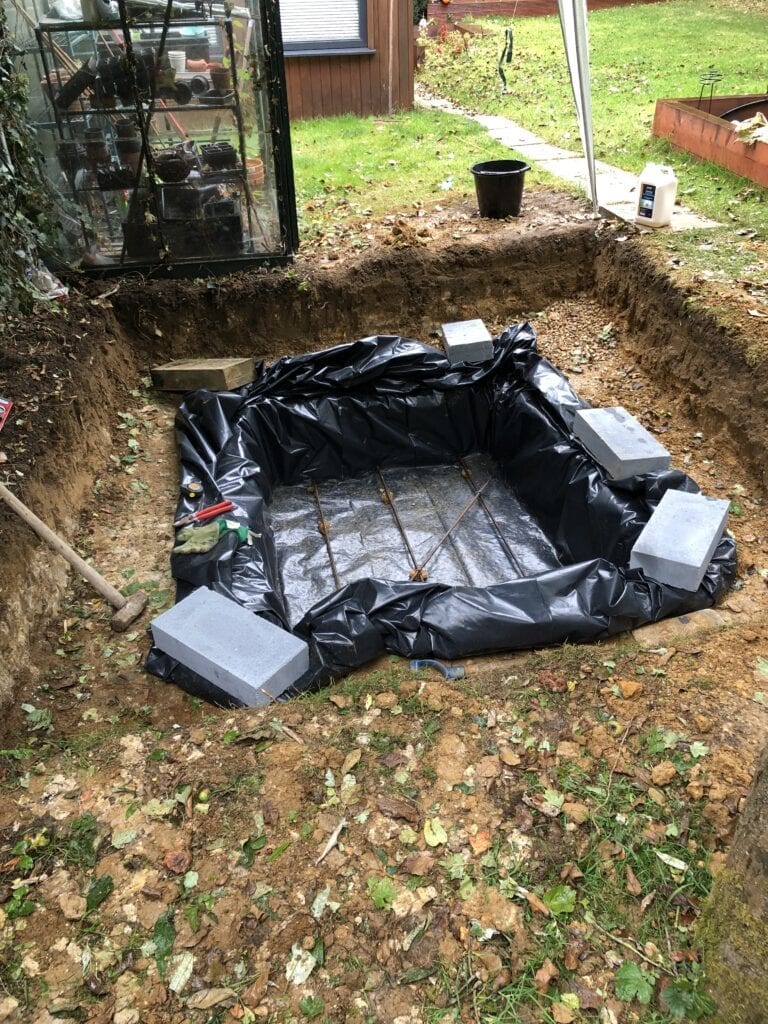 Now it was time to mix some concrete.

Mixing the concrete rather than digging a hole was a welcome change. However, what I didn’t realise was just how much concrete I was going to need. I’d looked at hiring a mixer which I would definitely recommend. I did say looked at hiring as I never actually got round to hiring one.

The problem I had in my head was I wasn’t sure how long I was going to need it. At this point in my build it was early October so the weather was a bit unpredictable. What I didn’t want to do was hire the mixer and then let it sit unused for a week and have to pay for it.

A bit tight? Perhaps! So, I was mixing wheelbarrow after wheelbarrow of concrete. I was mixing sand and cement at around 4 parts sand to 1 part cement. I was also making the mix not too stiff so it would pour ok and be a bit easier to level out.

What I also did every step of the way was add lots of water proofing liquid agent. As I said, I wanted to make sure this big hole did not leak. Bit by bit I worked from the bottom up. I filled and had a level base, then it was time for some block work.

I hadn’t laid blocks or bricks before but I thought I would give it a go. What I certainly am not going to win any prizes for was speed – I was very slow. Having seen the professionals do it when they were building my extension, I was very slow indeed. That said, it wasn’t a race so it didn’t really matter.

I made the mistake of not getting the base totally square. I was out by about 2cm which isn’t the end of the world but if I had spent a bit more time putting in guide lines, then I think I would have been spot on. The only real tip I have is take you time and check the level of each of the blocks as well as the continuous level of the course of blocks.

I mixed my mortar a little wetter than most as I knew I wanted it to last a bit longer as I was slow. Too wet and your heavy blocks dont sit well so this is something to consider too. If you start with a level base it makes life so much easier. The deepest part of the tub was not 100% level when I started laying the course of blocks. What this means is that you end up having to compensate to try and level things out.

By the time I came to the second layer, I was a bit better. I put in the guide lines and I was also starting on a level base so life was much much easier. When I finished, the top runs were perfectly square. Result!

For those of you who are regular readers of [...]

Why Pool and Hot Tub Plumbing Should Remain Separate

I get asked an awful lot about combining pool [...]

Why I fitted an Air Source Heat Pump to my Hot Tub?