We have the ultimate DIY Project for you. Building a DIY Hot Tub for your Backyard; is not as complicated as you think. In this blog post we are going to look at all things building supplies related so blocks, concrete, mortar, and more. 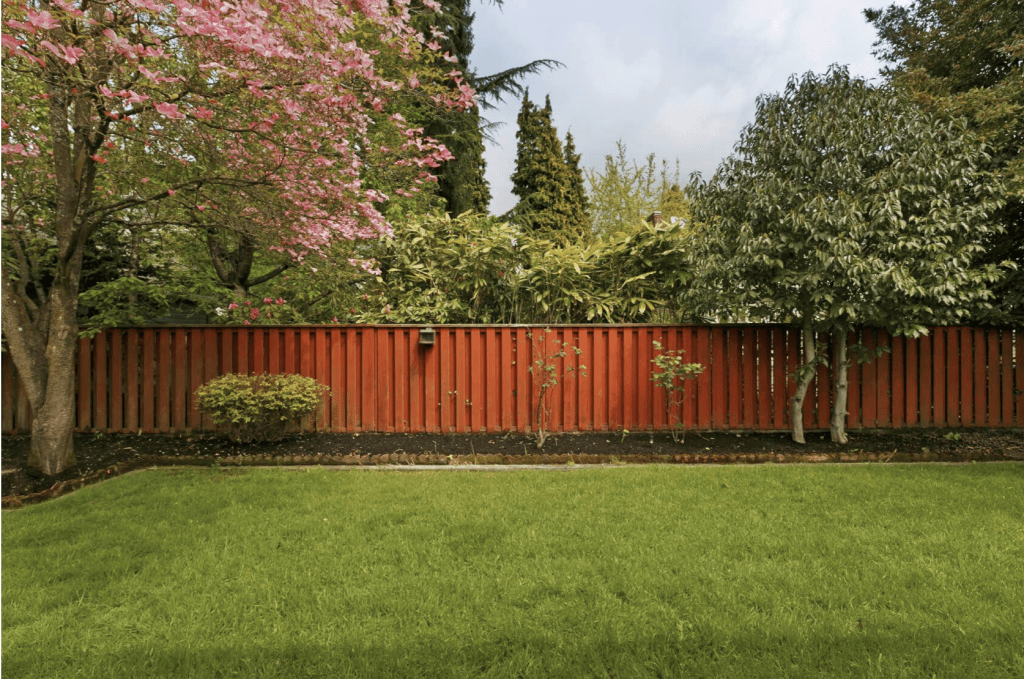 Contents hide
1 Mortar Mix
2 Hardness of blocks
3 How many blocks do I need?
4 How do your Cut the Blocks?
5 Gunite Holes
6 Backfill of Concrete

I was mixing the mortar by hand as I wasn’t sure how long it was going to take or how much time I had and because of the time of year, what the weather was going to do. This was back breaking stuff, not as bad as digging the hole, but it was hard work. That said, it was possible to mix in a wheelbarrow and I was mixing at a rate of around 4 to 5 parts sand to 1 part cement. I am sure there are some builders out there that would have a different opinion to this, or perhaps a more refined opinion for the different applications, but this ratio worked for me.

It was not too hard that it didn’t last and set too quickly and it was not too soft and watery either – it was just right. You should be able to pour it if you are backfilling, and make it a little stiffer if you are going to lay blocks with it – just makes life easier.

Don’t make it too hard or too soft as both affect strength of the mix.

What I was also doing with the mortar mix was adding water proofing agent and plenty of it each time. As you can probably guess whilst you are reading this, I was really worried about the Tub leaking! I took every precaution possible to make sure that it was not going to leak.

Blocks seemed to come in different hardness offerings. This is for the amount of force they can withstand when you are building tall structures with lots of courses of blocks. Makes sense I guess and I am sure there is a proper explanation out there for what is what. I wasn’t sure exactly what I needed so went with a middle of the road 7N of hardness. Also, I didn’t think that I needed any more because I was only going up a couple of courses so there was not a lot of pressure on them. If anything, the pressure had to be on the sides coming from the water.

How many blocks do I need?

This really depends on how big your project is. My Hot tub is 2.3m x 2.6m and I ran two courses on the lower part of the tub and 2.5 courses on the top section (back of the seat) this used roughly 100 blocks in total, I did have a few spare at the end. It’s a simple calculation, take the dimensions of your tub and divide them by the length of the blocks, simple really.

Top tip to make life easier for yourself, pick your dimensions so that you use as many full bricks as you can. The less you need to cut the better. Also, make sure that you order a few more than you need as if you are cutting them they can split. If you drop them, they shatter, so you do need to have some spares on hand.

How do your Cut the Blocks?

Having the right tools for the job makes life a lot easier. I bought a block hand saw from Amazon for about 15 quid and it made mincemeat of the blocks when I needed to cut them. It was really easy and you just let the saw do the work. I was even cutting the final half course of block by splitting them into two which with the saw was an easy task. There were more expensive powered cutting disks and saws out there, but for the amount of cuts I was making, I didn’t think it was worth it.

Once you have your block walls in place, and they have had a couple of days to set properly, you need to be cutting some holes to slot in the Gunite bodies. These are pretty big holes so you are going to need a core drill bit. As I have said having the right tools for the job make life easier so if you want to really make life easier, go and hire a bore drill and the correct sized core drill bit, probably 2.5” wide. If you want to save yourself a bit of money as I did, then buy yourself a core drill bit online which are relatively inexpensive and use your power drill. This might seem like it is going to be easy but….The first thing is that the core drills do bounce around quite a bit until you have sunken the first 5mm. Getting that first 5mm in the right place is quite hard. So here is what I did. I took one of my spare blocks and measured the height that i wanted the jets to be – roughly in the middle of my back when i was sitting on the seat. Then I cut out a “u” shape with the block saw in the block. This was the right size so that I could then put the core drill bit through. This made life a lot easier when cutting the holes as there was a guide and holding the block in place with my foot, it steadied the core drill for those all important first 5mm. Yes, perhaps hiring a bore drill would have been easier, but I saved a bit of cash with this method. 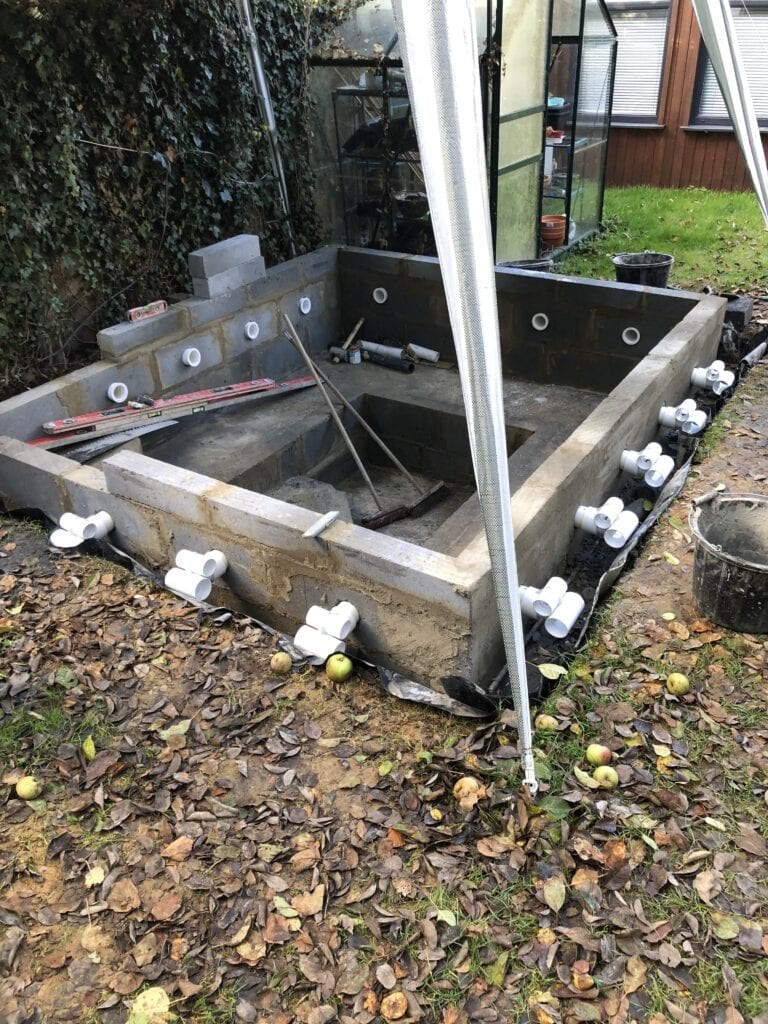 Once I had all the holes drilled, it was time to drop the gunite bodies into place, and then cement them in. I took a bit of time to make sure that the holes were correctly filled as this is an obvious place for leaks to be. I wasn’t overly concerned as I planned to backfill over the gunite bodies and the pipes anyway. Firstly for strength and secondly for water proofing.

It is also important when you put the gunite bodies into place that they are totally perpendicular to the wall of clocks you have laid. If like in my case some of them are not, then your jets do not sit 100% flush onto the walls. Not a huge problem, but it is one of the things I would have taken more time to get right had I known that it was going to be a problem. Not a big issue in my case, but it is something that niggles in my mind as I know they are not 100% even if everyone else doesn’t realise when they use the tub.

I’d already come to the conclusion that if the block work has nowhere to move, then it cant move! Having not done any block work before, I was a little worried that the structure would collapse under the pressure of 2800 litres of water, especially at the bottom of the tub. Therefore, I made the decision that I was going to backfill all the walls with concrete so it simply was not possible for the blocks to move, regardless of the pressure. Therefore, I dug the gap to be more than I needed and poured cement in behind the walls to more sure they were totally solid. Once my external pipes and gunite bodies were in place and concreted into place, I did the same again. Pouring lots of concrete with large amounts of water proofing agent behind the blocks. In this way, I knew they were going to hold fast because there is nowhere for them to go. It also added as an additional water proofing measure in my mind because I was filling any gaps that there might have been. It was also a good place to get rid of the off cuts of blocks and things so I didn’t need to throw them in a skip, I just used them to strengthen the block work. 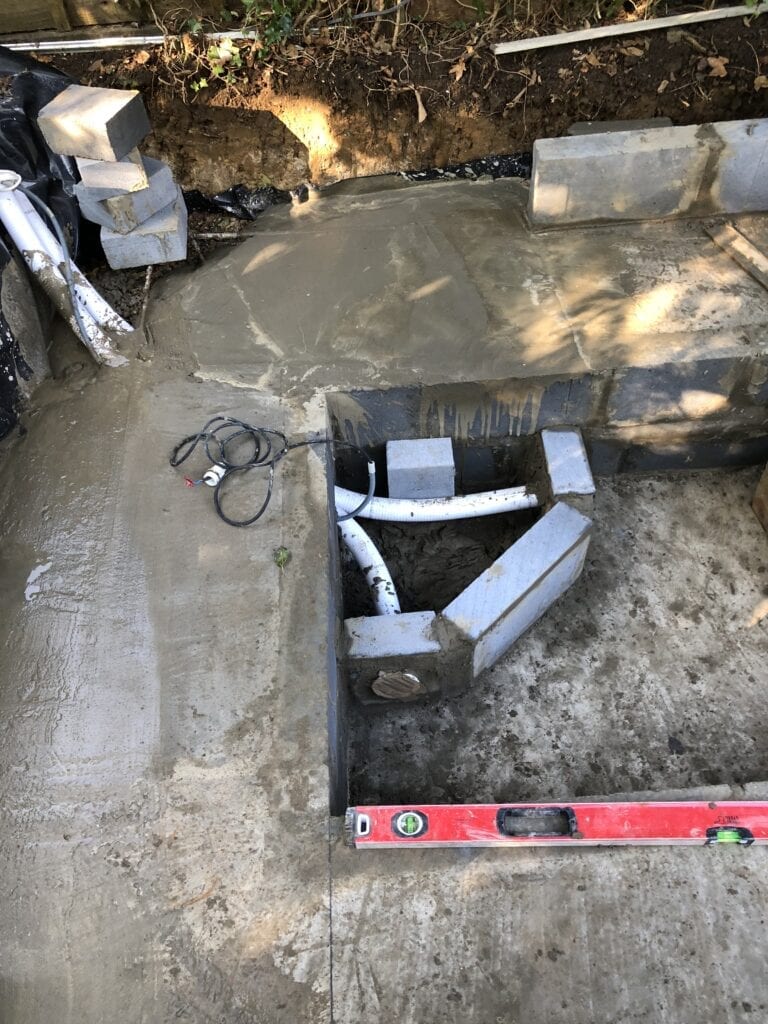 As before, If I did this again I would hire a concrete mixer as mixing by hand was a little bit of hard work but doable as I proved.

Hope you enjoyed the article. If you want to read the full article, click here.