Jody got in touch with me back in May of this year. He was planning a pool and hot tub combo in his backyard but was getting quoted astronomical amounts of money by pool builders.

Having spoken to Jody a number of times now, I know he is not the kind of guy to let something like that get in the way of what he wants. He is certainly very determined but he is also going to get it on his terms – eg not paying a fortune for what he wants!

He wanted to find a cheaper way of doing things and this lead him to me and my website.

The scope of work initially was the design of the hot tub portion of the build but this quickly progressed into me designing the plumbing layouts for the pool as well.

Based in Northern Ireland, getting the parts that you need locally was also a challenge for Jody so I have also supplied him all the parts that he needs for his hot tub and pool project.

Before we get to this, I want to take a few steps back and talk about the design stage. As I have said earlier in this article, Jody knows exactly what he wants.

“Andi, you must think I am crazy”

This was part of one of our conversations regarding the design. My response to Jody was quite simple – “Jody, yes, you are crazy” So how is this going to be one of the craziest projects I have been involved with?

Take a look at the artist mock up of what Jody is going to build. I haven’t drawn this up, it was from a 3rd party that Jody was brainstorming ideas with. 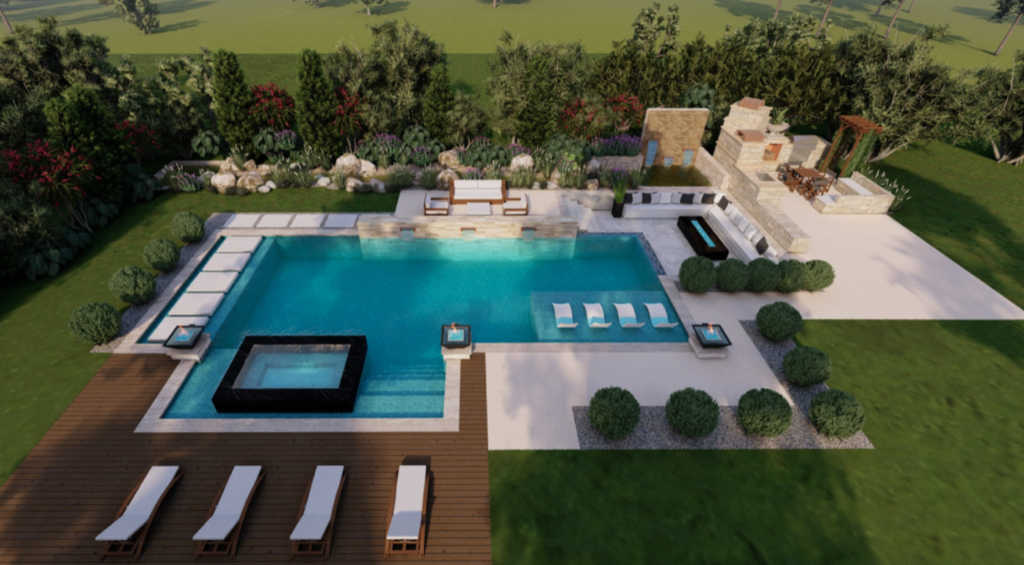 I can only describe this as “When Miami meets Northern Ireland”. I’ve been fortunate enough to be involved in some pretty cool DIY hot tub and pool projects. This one is challenging for the top spot!

The design is beautiful. There is no arguing with that. So why do I think Jody is crazy? I’ve done projects in Florida, Hawaii, Thailand, South America and more. What do these places all have in common? They have fantastic weather.

Northern Ireland, despite its absolutely stunning natural beauty and enviable scenery, doesn’t have an average temperature of 70F all year round. Nor does it have countless hours of sun like the Sunshine State. My biggest concern for Jody and his build is the Northern Irish climate!

“Don’t worry about that” said Jody – I’ve plans to enclose it all next year he said– so basically is going to make this indoors if the weather proves an issue. As I said, he knows what he wants and not even Mother Nature herself is getting in the way of this.

I’ve mentioned many times on my blog and YouTube Channel, the “swimming pool tax” as I call it. This is where parts and anything to do with pools are more expensive just because you have the word “swimming pool” in the title.

Jody is a smart chap. So how do you get a concrete poured pool without the “swimming pool tax”. This, in Jody’s mind was straight forward. If you don’t know Northern Ireland, once you leave the major cities it is very rural. Open spaces, rolling countryside, absolutely stunning landscapes. Given the rural nature of things and quite a lot is “off grid” in terms of utilities. Therefore, building external water storage tanks is quite normal on farms and properties alike.

So what does Jody do? He gets on the phone and starts ringing round for quotes from people to build him a “water storage tank” that just happens to be the dimensions of the pool he is building!

Once he has a written quote from them, just because this water tank is going to be fitted with plumbing fixtures to become a swimming pool doesn’t mean they can charge him more. He gets a poured concrete pool for the price of a poured water tank – GENIUS!

When he called me and told me what he had done I nearly fell off my chair! This approach is absolute genius. My approach is always to help save money for my customers by the DIY approach on pools and hot tubs – but this is a different level. Jody, hat off to you sir!

So, with the “concrete water tank pour” all quoted out, low cost pool and hot tub designs from yours truly done and parts supplied by me – he is onto a winner. He’s shared the budgeted figure he thinks it is going to cost and it’s pretty impressive. For clarity, impressively low! I’ll save this until the end of the build and see how close he actually gets. 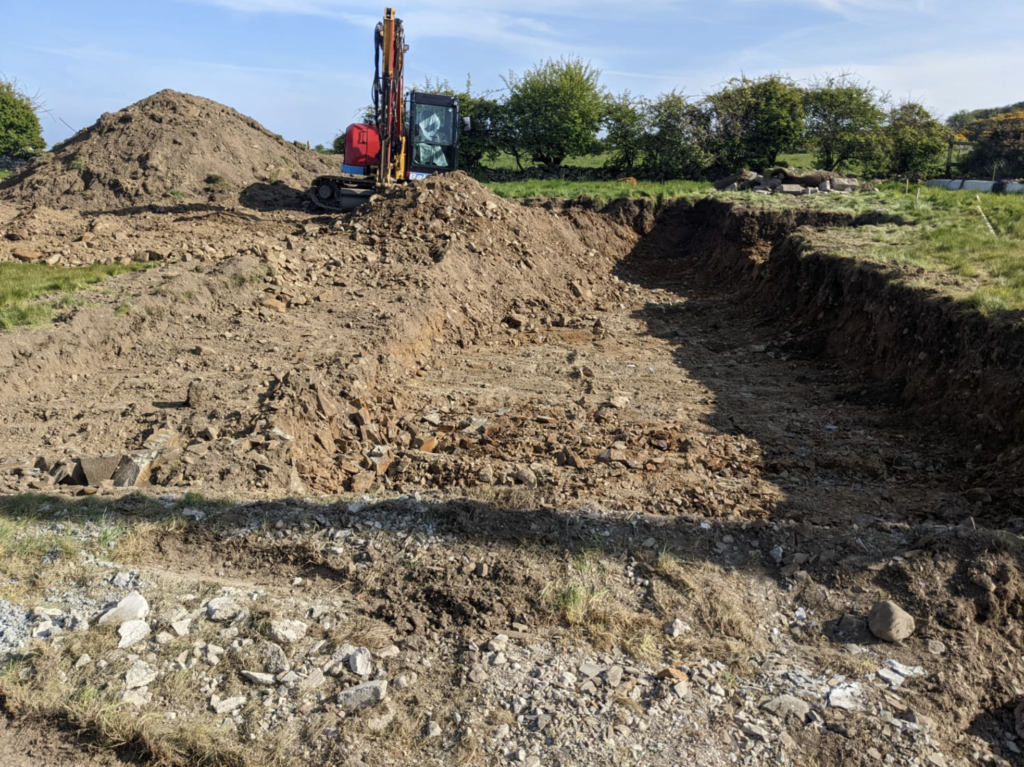 It is quite easy to forget the sheer amount of earth that needs to be removed when you are building a swimming pool. look at the size of the mountain next to the digger. From the picture above you can clearly see the shape of the pool and the hot tub that is coming from the side. Jody is keeping the waters separate so there will be no overflow but we have put in a plumbing design to allow the pool and the hot tub to be heated with the same air source heat pump. 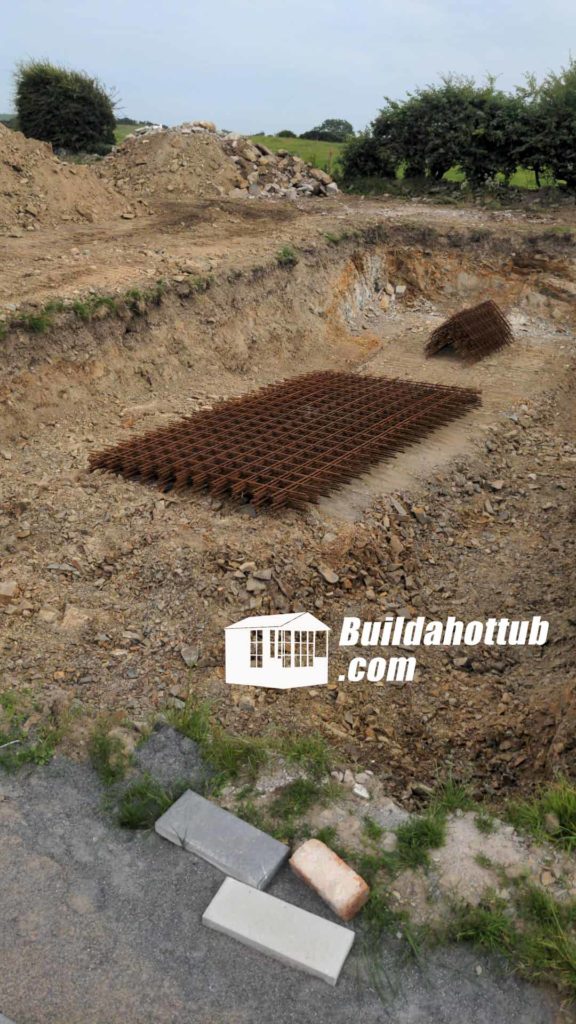 With the hole dug, next steps are to put in some foundations for the walls, known as footings. This clip from Jody’s drone footage shows the size of the site and you can clearly see the pool and the hot tub location. Next step is to put in the shutters for the walls. This is basically the wooden form for creating the walls. Jody isn’t opting for a mono pour so will pour the walls first, then will pour the floor a few days later. 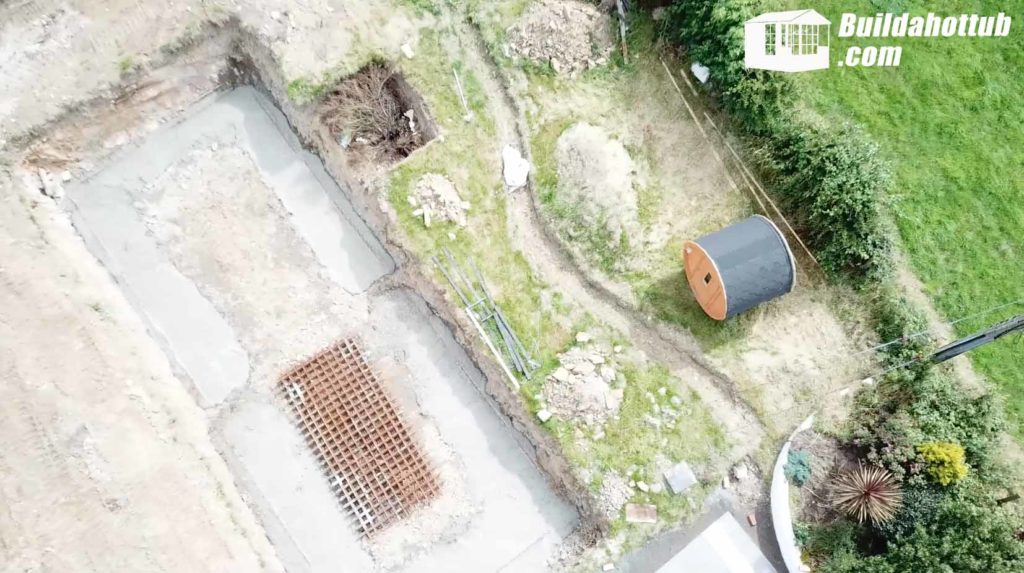 Time for some walls…

With the footing poured, the next stage for Jody and his contractors is to begin to pour the walls. The plan is that the walls will be framed and poured in stages. You can see from the image below that the process has begun. You can see in the images the below the sheer size of the pool that Jody is building – pretty impressive structure. 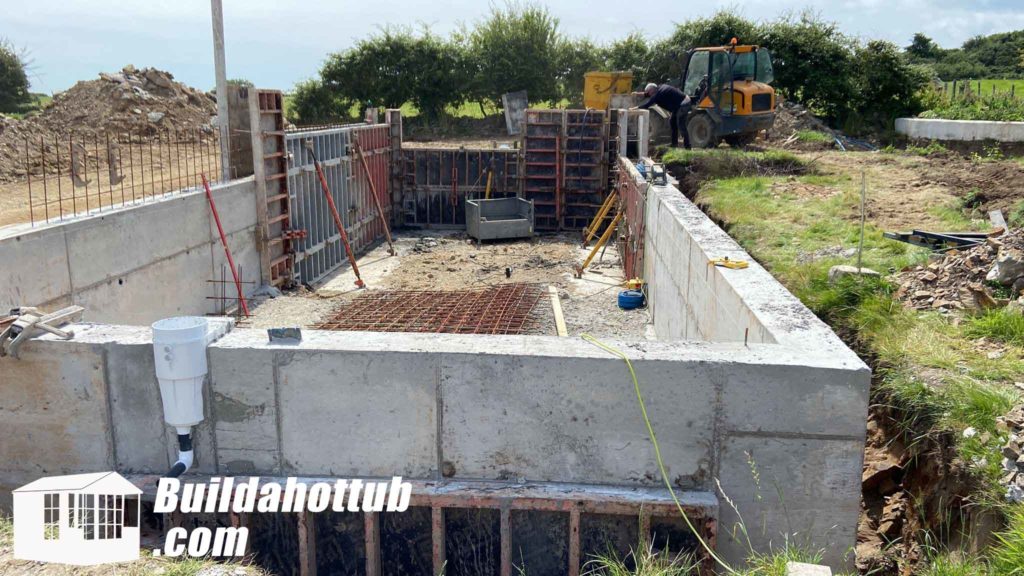 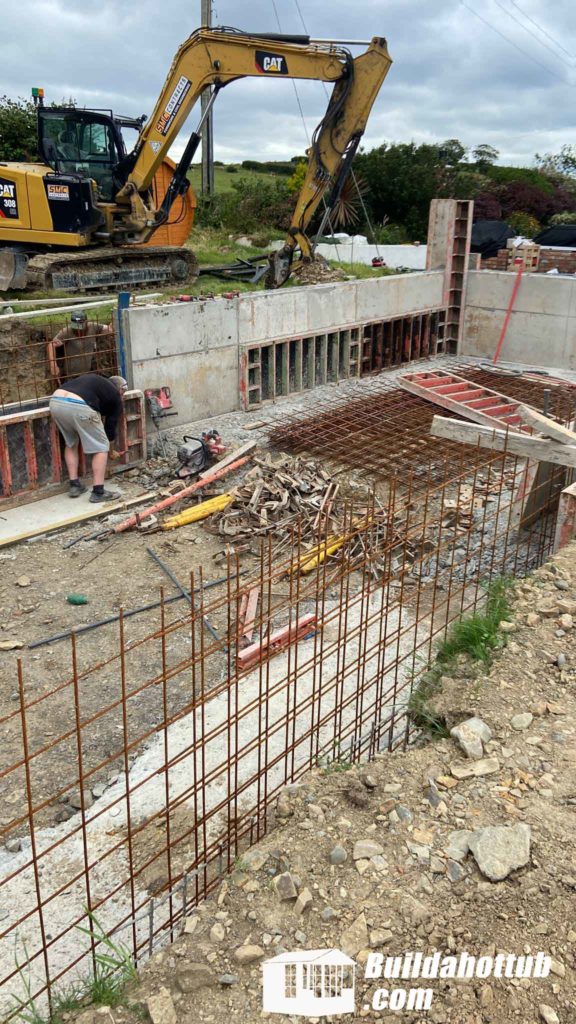 Just a small update really this week on Jody’s build. Things are not quite going to plan. One of the downsides of doing a DIY build is that the build and the plan tend to have to be very fluid in terms of their design. For Jody, the issue is with the concrete contractors that he is using. In order to save himself a whole bunch of cash – he thinks best part of $40K by doing a DIY build he is at the mercy of his concrete contractors.

From my conversations with Jody, they certainly have not been the most reliable – but unfortunately, I think and he agrees that this is the price you have to pay to get the cut price pool build.

In the video below I will update you on the current standings. In short, the walls are all now in and the next step is getting the floor poured. This obviously relies on the concrete contractors turning up which unfortunately, to Jody’s frustration they have not done for the last few days when they have said that they would.

I’m sure they will come good – watch this space for the latest developments on this “crazy” project.

This is an ongoing project

This is an ongoing project, so please do check back regularly for updates. Remember, if I can help you in any way, please do get in touch with the form below. Let me know what you are thinking – even the craziest of ideas like Jody’s are possible!

Read More
Comments Off on When Miami Meets Northern Ireland

Can I build a DIY Swim Spa?

Read More
Comments Off on Can I build a DIY Swim Spa?

I’ve mentioned many times on this blog and on [...]

Hot Tub Wall Construction – What are the options?